"Point of Origin"
"Worst Day Ever" is the fourth episode of the first season of 9-1-1. It was written by Zachary Reiter and directed by Bradley Buecker. It aired on January 24, 2018.

In the aftermath of a deadly plane crash, Bobby and team race to help the survivors, while Athena deals with panic and chaos at the airport. Bobby confronts his past demons; Athena is out for revenge against a group of teen bullies; and Abby delivers an important message from a 9-1-1 caller.[2] 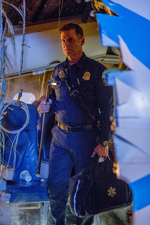 Responders Go Into The Water To Save The Plane Crash Victims Season 1 Ep. 4 9-1-1

Officer Grant Responds To A Duct Taped Passenger On A Plane Season 1 Ep. 4 9-1-1