The New Abnormal is the first episode of the fourth season of 9-1-1, and the forty-seventh episode overall. It aired on January 18, 2021.

When the Hollywood Reservoir dam breaks, Bobby and the 118 race into action to save passengers on a city bus that has crashed into a building several stories in the air. Maddie must first locate, and then rescue, a trapped cyclist, and Athena helps an agoraphobic woman evacuate her home. [2] 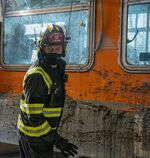