The 126 is shut down and the crew is dispersed across the city. a massive and unexpected arctic front hits Austin with an ice storm, causing widespread chaos, Can Owen & Tommy not only save the city but find a way to resurrect and reunite the former 126? 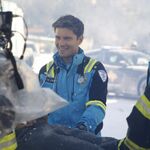