Ravi Panikkar is a character on FOX's 9-1-1 who is a probationary firefighter at Station 118 of the Los Angeles Fire Department. He first appears in the season four episode "Jinx", credited as Probie. He is played by Anirudh Pisharody.

Ravi had cancer as a child and spent practically his entire childhood in hospitals getting chemotherapy on the weekends.[1]

Ravi first appears in "Jinx" as a new probie firefighter of the b shift of Station 118. After he finishes his first shift, Buck calls him over, startling him. After recovering, he asks him how his shift was, and he answers that his shift was "quiet", making the other firefighters suddenly panic. As Buck tries to explain to Ravi that the "q word" was not supposed to be used while they're on shift, the alarm goes off, and Chimney declares their shift is now "jinxed", and they leave a confused Ravi behind. 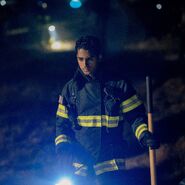 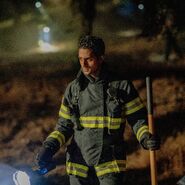 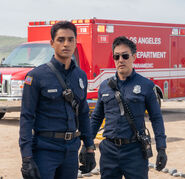