"Powerless" is the seventeenth episode of the third season of 9-1-1, and the forty-fifth episode overall. It aired on May 4, 2020.

The 118 races to rescue a little girl in a runaway hot air balloon and help with a city power outage caused by a hijacked tree-trimmer truck. Meanwhile, Athena's investigation into the serial rapist case puts her life in danger. [2] 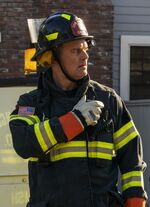 Athena Worries She Might Not Catch The Serial Rapist Season 3 Ep. 17 9-1-1