A going-away party for a bank manager turns into an emergency, and then a mystery, as the first responders are accused of pulling off a daring heist.[1] 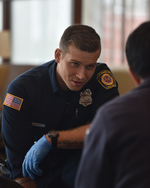