"Chimney Begins"
"New Beginnings" is the eleventh episode of the second season of 9-1-1, and the twenty-first episode overall. It aired on March 18, 2019.

Bobby meets Athena's parents for the first time and Maddie attempts to end her marriage for good, causing Doug to insinuate himself even deeper into Chimney's life. Meanwhile, a tanker carrying a tiger shark crashes on the freeway and a gas leak in a plastic surgeon's office happens mid-surgery.[2] 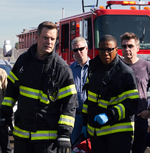 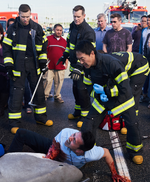 Athena Has An Emotional Argument With Her Mother Season 2 Ep. 11 9-1-1