"Karma's a Bitch" is the eighth episode of the first season of 9-1-1. It was written by Kristen Reidel and directed by Barbara Brown. It aired on March 7, 2018.

What goes around comes around for an unremorseful widower, an arrogant fitness club owner and an unsuspecting thief. Meanwhile, Bobby gets a surprising phone call from his doctor after donating at Chimney's blood drive, and Athena confronts Michael after having a heart-to-heart with their kids.[2] 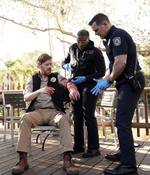 First Responders Arrive To A Man Burning In A Tanning Bed Season 1 Ep. 8 9-1-1