Halloween finds the first responders racing to the rescue at a cemetery, a haunted hayride and a spooky Hollywood parade; Meanwhile Maddie thinks she has received a "ghost" call from a missing hiker; Hen finds herself facing with a life or death situation with the father who abandoned her; Eddie reconnects with his estranged wife.[2] 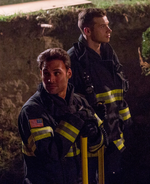