"It wasn't easy, but I'm really glad I did it. And I finally feel free."
—Maddie to Chimney after visiting the place where Doug died.

"Christmas Spirit" is the tenth episode of the third season of 9-1-1, and the thirty-eighth episode overall. It aired on December 2, 2019.

The 118 responds to holiday-themed incidents, including a shopper pushed over the edge, a woman who is literally having a "Blue Christmas" and a luggage handler accident on a tarmac. Meanwhile, Maddie revisits her past to embrace her future and Bobby receives shocking news.[2] 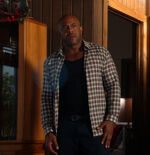