"Fight or Flight"
"Chimney Begins" is the twelfth episode of the second season of 9-1-1, and the twenty-second episode overall. It aired on March 25, 2019.

Look back at how Chimney joined Station 118 and became the firefighter and paramedic he is today.[2] 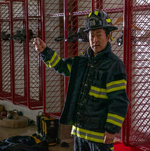