Buck Begins is the fifth episode of the fourth season of 9-1-1 and the fifty first episode overall. It aired on February 15, 2021.

The 118 race to save the lives of workers trapped in a five-alarm factory fire. Meanwhile, Maddie reveals a painful family secret that causes Buck to confront his childhood and answer why he is the daredevil he is today. [2] 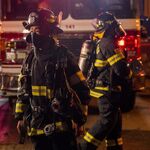