"There Goes the Neighborhood"

Breaking Point is the eighth episode and winter finale of the fourth season of 9-1-1 and the fifty fourth episode overall. It aired on March 8, 2021.

The 118 are called to the tarmac when a flight attendant reaches her limit with her flight's passengers. Athena discovers that quarantine has pushed a couple to their breaking point. Meanwhile, Eddie worries Christopher will not accept him dating, Buck reconnects with an old flame and finds himself in the middle of Albert's new relationship and Maddie and Chimney make a big decision about their baby. [2] 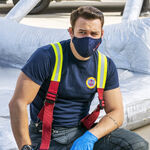