Blindsided is the ninth episode and spring premiere of the fourth season of 9-1-1 and the fifty fifth episode overall. It aired on April 19, 2021.

Athena and the 118 race to save lives after a drunk driver causes a deadly pile-up going the wrong way on the freeway and are shocked to discover who one of the injured is. Meanwhile, Maddie is determined to finish her shift before going into labor; and Hen and Karen are heartbroken as Nia prepares to be reunited with her birth mother. [2] 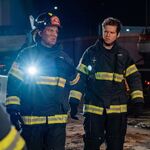