"Seize the Day"
Albert Han is a character on FOX's 9-1-1 who is the half-brother of Howard Han. He was a recurring character in season three, and was promoted to the main cast in season four, but was demoted in season five.

Albert came from Korea to visit Chimney in Los Angeles to escape their overbearing father, Chimney invites him to live with him after working out the resent he had towards him.

Moving in with Buck

Albert moved in with Buck after Chimney moved back in with Maddie.

Albert briefly had a rift in his friendship with Buck after he started dating Veronica, a girl that Buck had previously had a bad date with in "There Goes the Neighborhood". However, Albert later broke up with her in "Breaking Point".

In "Blindsided", Albert is involved in a serious car crash when he is sideswiped by a drunk driver and his car flips over, landing in a drainage ditch. Prior to the accident, he had tried to call 9-1-1 to alert them about the drunk driver, but his call was dropped shortly after May Grant answered it. When May tries to call him back, she receives Albert's voicemail and alerts the 118 that he is danger. The team is able to find him, but he goes into cardiac arrest in the ambulance. However, Henrietta Wilson manages to revive him after performing CPR. Albert remains in a coma for several days following the accident.

After being discharged from the hospital, Chimney and Maddie took care of him at Chimney's apartment until he had fully recovered.

In "Survivors", it is revealed that Albert had joined the LAFD after passing his certification test.

Albert worked at LAFD Station 133, which was one of the firehouses that responded to the call center fire. He was sent up to the roof by his captain to vent the fire and got to work with his brother Chimney for the first time on a scene. While they were trying to vent the fire, the roof collapsed and Albert nearly fell into the fire, but Chimney was able to pull him back up.[1]

With his probationary year ending soon, Albert questioned his career as a firefighter, as he found the job harder than he thought it would be. He discussed it with Chimney, but he dismissed him and told him that the first year is always hard and that he will find his way in the field. However, after the fire at the call center, they had a heart-to-heart and Chimney told him to quit the fire department if he wanted to.[1]

After quitting the fire department, Albert took a career aptitude test and found out that archaeologist, librarian, sociologist, trial lawyer, and cosmetologist are the top five occupations that fit his personality profile.[2] 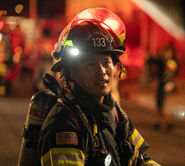